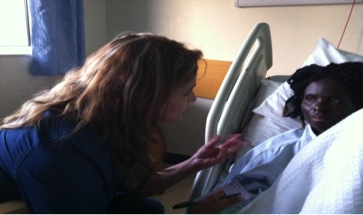 When we arrived at the room, there were two nurses standing on either side of Ritha. She was being poked for blood, and she was squeamish and unhappy. She recognized the kind doctor who accompanied me to her room and looked me over. I was introduced briefly, but the focus was on the blood or lack of blood.

“They have been poking me so many times, and nothing comes,” Ritha said.

I stood by the curtain for a while, and then I heard her small cries. I walked next to her bed and held her hand. I could not do anything but be present with her. I was becoming somewhat alarmed of the pokes and the cries of pain, so I stepped aside by the curtain, then the doctor asked me to step out and I did.

“Here, wash your hands and wear gloves. You need to be careful when there is blood,” she said.

The blood was extracted finally. The nurses left, and we sat close to the bed: the doctor on one side, I on the other. The doctor explained to Ritha a bit about what I do, how I help people heal though poetry. Very briefly, they talked about what Ritha had eaten (or not eaten, the lunch or dinner tray untouched nearby). Ritha said she did not like the food. The doctor talked about how Ritha would need her energy to go home, and that is when I saw a light. Ritha’s face opened.

“When am I going home?” she asked.

I felt this was a cue. I took out three journals from my bag and paper and a packet of poetry. I showed Ritha the journals and asked if she would choose one. I held two up, then another. She chose one of the books. I asked her if she would tell me a little bit about how it felt to go home. I wrote while she spoke.

Now I am going home….
The hospital arranged it for me
They treated me
and they have been paying for my son’s school fees
And they gave me all I needed
I love them so much. They gave me
money to go home to my country to start my business
They will not let me down
And I will never forget them
I had a restaurant and I sold it
I agreed to work for a woman in Dubai
in her restaurant
When I reached there
I asked to go to the restaurant
The woman told me there was no restaurant
She took all my documents from me
and told me:
You are going to do as a sex worker
I was confused because in my life I have never done that sort of thing
She took me into her house
and she told me she wanted seven thousand dollars
She used to bring for me men
She brought for me three men in one day
and they fucked me and they gave me money
Each one 100 Dirhams and the next time
I started bleeding
When she brought the men I said those men cannot fuck I am bleeding
She told me even if you are bleeding
They have to fuck you because I want my money
I refused and she left me for one month in the house
While I was bleeding
She didn’t give me food
She didn’t give me drink

When she saw that I was going to die
sleeping on the floor without a mattress, bleeding
She called the taxi
She took me to Dubai
and she threw me there behind Dubai hospital
The ambulance came and picked me up
The nurse asked the ambulance man
Where did you get this lady?
The ambulance driver told the nurse
I picked her up outside
The nurse asked me who has brought you here?
I told them about the woman

I found one lady, one Pakistan lady
She asked me what happened
She took care of me
She asked me if I wanted to eat or drink
She gave me a bed to rest in
I saw the others
They told me they would do everything they can for me
They accompanied me to the court until the case was over
Then they started to treat me
They took me to many hospitals
They took me to expensive hospitals

As she said the sentences I repeated them and wrote word for word. (It has been edited here for clarity.) At the end, a weight was lifted from her, and there was a great sense of relief in the room.

"Ritha, would you like me to read this story to you?" I asked.

"Please do," she said. "I want to help others with that story."


I left Ritha the journal and told her it was there for her if she felt like writing. She smiled. I also left with her a poem called “The Angel Who Lost His Wings,” but I did not read it to her. Enough had been said by then and I could tell Ritha was tired.

I said goodbye and wished her a good trip home. It was hard to leave; there was so much shared. Before I left, I mentioned my work as a poetry therapist at a safe house. I also mentioned that I too have been abused when I was younger, and I understood the feelings. It felt right to share this with her.

I was allotted only one visit with Ritha, but I wanted to see her again. Would this be the right thing? Was it professional? When I talked to a friend who was very involved in social work, she told me I should go.I had just bought two beautiful scarves for myself: one green and one pink. I was wearing the green one, and I decided to give the pink one to Ritha with a small booklet of poems I had put together for my workshops. After I called and got permission from the hospital, I gathered it all up and headed out.


Ritha seemed a bit brighter, and she was happy to be going home soon. I sat with her for a while and gave her the beautiful pink scarf. She put it on with a smile and said she would wear it on her trip home. I took out the medicine—the packet of poems I had brought. There was one poem in particular I wanted to work from called “Windows.”

"Do you feel like writing today?" I asked Ritha.

"Why don't I read a poem first and then we will write?" I asked.


I turned to the poem, and she gently took the little booklet of poetry from me and started reading the poem. She read each word, each sentence in the most eloquent way, pausing to look at me throughout.

All I want is a window….


When she finished she looked up, and then she repeated a few of the lines.
Ritha was a natural at poetry therapy. This is what we usually do at the end of a poem, mirror back lines. I asked if she wanted to write from the prompt. She agreed, and I wrote as she spoke.

I asked her if she wanted me to read it back to her, and she said yes. I noticed there was a nurse in the room, and as I finished reading the poem, I explained to the nurse that this was a poem Ritha wrote. When I finished, both Ritha and the nurse smiled. I gave Ritha and the nurses some Persian sweets: pistachio baklava flavored with rose water, some saffron, and cardamom. She had her booklet from the day before, and we looked through it. She stopped at a poem, and I began to read it for her.

"That is actually one of mine," I said.

She looked at me kindly, "I know," she said.

I was touched. "Do you want to write a poem together?" I asked.

Here is the poem Ritha and I wrote together:

We sit together in Peace and Silence as we write

We were talking of the problems we face in this world

We find this world is not easy


I find I am sitting in front of a mirror

One day I kept quiet
I wanted to get up on the balcony and fall down
because of the problems I got
I listened to my heart
My heart told me
Why do you do that
God still loves you
And your family still loves you
I thought it was an Angel
who is trying to defend me
I sat down and I started to cry
I asked my heart again
Why is it always me?
My heart told me it’s not only you
But you have to believe in God
because many people want what you have received
but they cannot have it and they need help but no one can help them
So don’t worry
Just pray for God
God will save
YOU


Ritha then had to get some x-rays done. I went down with her and waited. She told me to come in, and I talked to her during the x-ray. On our way back to the room, we passed the flower shop, and she said she wanted some.

“No this one,” she said. “The biggest one here. I want to take it with me in my suitcase, or I will carry it.”

I thought she was kidding, but she was not. We settled on an arrangement of chocolates.

“Hopefully, your son will enjoy it as well,” I said.

“No, I will keep it like this as decoration and a memory,” she said.

We went to her room and talked for a while. I thanked her for our time together and reminded her of the simplicity of writing her feelings.

"Don't worry about me," she said. "I will go home, and the doctors will help me with their traditional medicine. I will send a picture to the hospital when I get nice and fat. I was so beautiful when I got here. I was 85 kilos!" (When I met her, she was skin and bones.) "Soon, I will be like that again," she said. I said goodbye, and one of her friends called her. I was happy she was on the phone as I left so she wouldn't be alone.

I left with a heart full of love, hope, sorrow, but mostly full of beauty. I was grateful to see the effect of the medicine of words.

A Poem for Ritha


Dr. Bahareh Amidi is a certified poetry therapist who believes healing happens through words and voice. She has a Masters in Family, Marriage and Child Counseling Psychology and has received her PhD in Educational Psychology from Catholic University. She has studied poetry therapy at The Institute for Poetic Medicine in California and is currently living and working in Abu Dhabi, UAE.  She has spoken on the topic of Poetry Therapy at TEDx in Abu Dhabi.