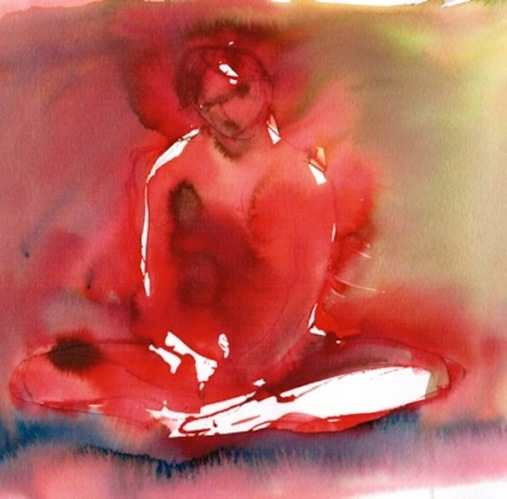 This is one of a series of watercolors I painted from sketches of a nude model doing yoga poses. I made the sketches in Iris Haeussler’s wonderful Journal Sketching workshop at the Toronto School of Art. The idea was to sketch quickly subjects that were moving—in films, during a ballet rehearsal, on the streetcar, at the train station. We documented life being lived or simply found an interesting line here or there and learned to see differently. You have to be compassionate with yourself to let go and sketch like that, to not judge, to embrace process without worrying about product. And you have to let go of your self-consciousness to allow yourself to be seen sketching in public, to stay open to the curiosity of passersby without worrying what they might think of your scribbles.


The yoga model posed for us in the studio so there were no passersby to worry about, only the model’s female body to stir emotions and judgments around our own female bodies. Painting from the sketches allowed me to introduce color and water, both useful for expressing emotion. That bold red orange says courage to me, the imperfect lines of sepia ink bleeding into the watery paint speak to a sense of human frailty and pain that is also beautiful. The painting feels peaceful but with a sense of light and movement extending into and out from the body, a sense that the boundaries between body and world are fluid.


Kim Aubrey’s short story collection, What We Hold in Our Hands, was published by Demeter Press in 2013. Kim is an editor for Red Claw Press and leads an annual writers’ retreat in Bermuda, where she grew up. She is currently working on a novel, poems, and a series of textile pieces. Kim earned her MFA in Writing from Vermont College of Fine Arts.